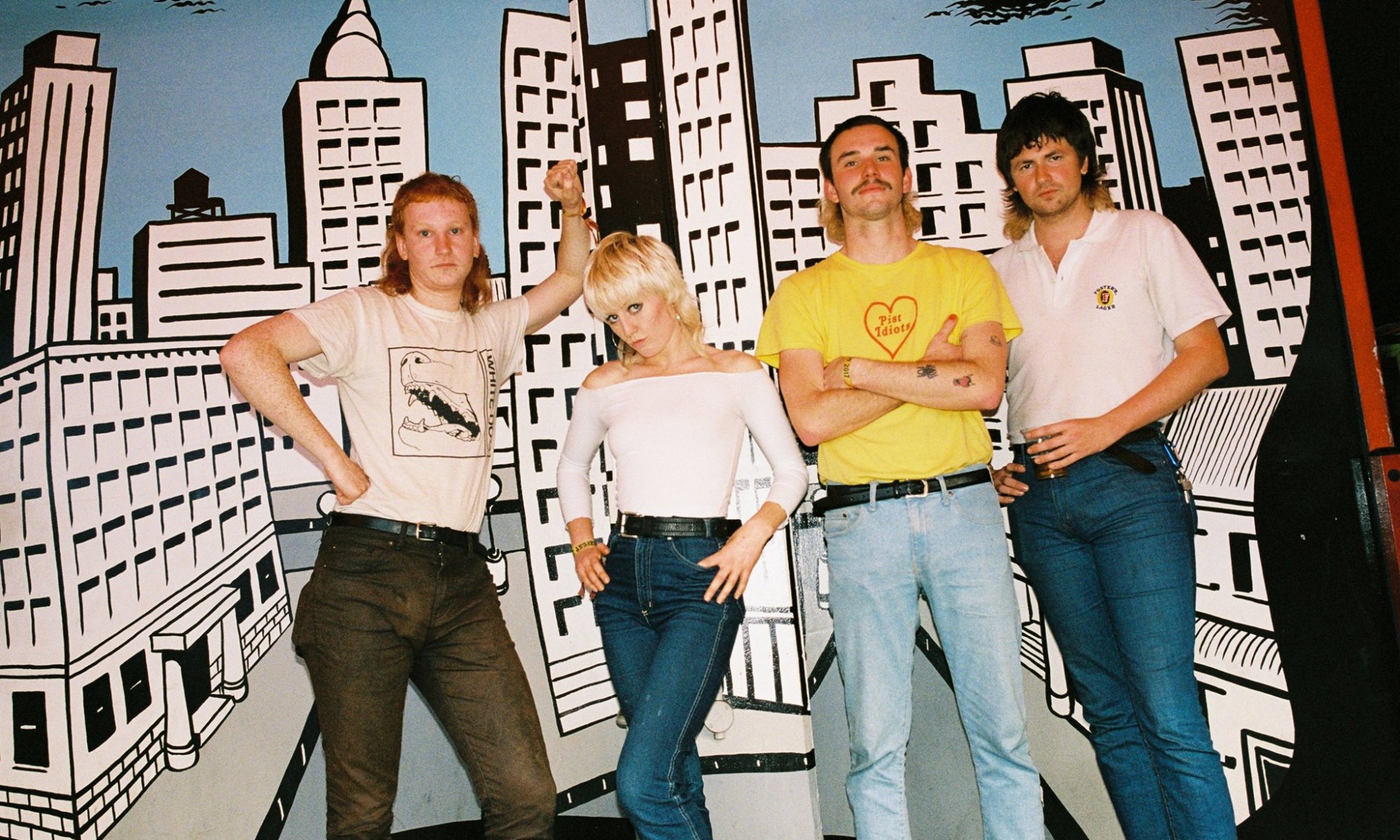 In 1974, film school student Greg Macainsh undertook a work of social anthropology. Scrambling around for an idea for a final-year assignment, he lugged his camera to the Melbourne Showgrounds where a few thousand people had congregated for an outdoor gig. Most of those in attendance were part of a curious youth subculture that had taken root in Melbourne in the mid to late sixties: sharpies.

A particularly Australian breakaway from skinhead and teddy boy cultures, sharpies were diligent about style. They liked to dress in striped sweaters, high-waisted jeans and chunky shoes, and flaunt wonky stick-and-poke tattoos. Mostly from working class or European migrant backgrounds, they would journey from the suburbs to participate in their favoured activities: heavy drinking, scuffles with other sharps and listening to their patron saint Lobby Loyde. Macainsh shot about twenty minutes of footage—all he could afford—and he abandoned the assignment when he went on tour with his own band, Skyhooks, but somebody cut it together as a short film years later, adding the soundtrack of Lobby Loyde & the Coloured Ball’s ‘God’.

In the film, Macainsh quizzes some local sharps: “What do you reckon about Melbourne?” (“It’s a hole.”) And, “Who cut your hair?” (To which he receives a repeated reply, simply “Grant”.) The sharpie haircut—an early iteration of the mullet—acted as an important initiation into the subcultural fold.

Skip ahead forty years and Melbourne four-piece Amyl and the Sniffers could be ripped straight from Macainsh’s footage—despite the band forming in 2016. As they recently told The Music’s Sam Wall, they did their own share of mullet trimming whilst travelling up and down Australia’s east coast on tour last year. By the sounds of it, fans were all too keen to be initiated.

The Sniffers’ embrace of Australian crassness is a key part of their operation. So too are meaty pub rock chords, Blitzkrieg Bop beats and colourful lyrics spat out by front-woman Amy Taylor—the eponymous Amyl—which have helped propel the band from recording in their St Kilda share-house to touring with Cosmic Psychos to supporting the Foo Fighters at an Adelaide stadium, all within two years.

This brisk upwards trajectory is curious—and not universally appreciated—but much of the band’s success can be explained by Taylor’s charisma. Live, she is a revelation: tiny frame, peroxide mullet, tight shirt and white leather cowgirl boots; she struts around, winks at the audience, tangles herself in the microphone lead on the floor. Her Sniffers—Declan Martens on guitar; Bryce Wilson on drums; and Gus Romer on bass (although Calum Newton plays on the record)—back her with their chugging rock and roll and the occasional guttural “hey!”

Big Attraction/Giddy Up is the combined release of two Amyl and the Sniffers EPs. The first, so the story goes, was written, recorded and put up on Bandcamp within twelve hours in January 2016, when the band formed as a lark, and the second was released a year later. The combined release, on Homeless Records, comes in at a whip-sharp twenty minutes. A sonic schism between each EP is evident, but forgivable. Taylor sounds more confident on the newer songs: throughout the first set you can picture her leaping around the share house—half serious, half taking the piss; in the second, she is a bonafide, electric front-person.

The Sniffer-aesthetic is deliberately funny, with plenty of clever head nods to Australian kitsch (the record is available in “Bain Marie Blue”), but it is not entirely ironic. Taylor grew up in Western Sydney surrounded by muscle cars and punk music, and then on the northern coast of New South Wales. As Nat Kassel points out for Monster Children, perhaps the later encounters with beachside surf-soul only served to calcify Taylor’s appreciation of hard rock. The image—although hammed up—is backed with a genuine toughness. The band cancelled a few shows last year when Taylor tore her ACL on stage and was told she’d need surgery, but she was back playing in Melbourne a few weeks later. (Backstage at the show she shrugged it off with a typically mischievous grin: “Girl’s gotta eat.”)

Taylor’s lyrics can be cartoonish in a way that some of the best punk lyrics are. (“Rack off mole / Sniff sniff / I wanna see some biting / I wanna see some biff” goes side-A track ‘Mole’.) Most songs centre on straightforward narratives—walking around the city, feeling broke but okay, lamenting the theft of a push bike—but Taylor’s delivery lends them a heart and depth that bands in a similar vein can lack. As well as the carefully drawn larrikin-punk image, it’s down to the simple strength of the lyrical storytelling that, with only ten recorded songs, the band has managed to craft a distinct synthetic world that they convincingly exist within.

As Australian punk—and music overall—enters a politically self-conscious phase, the Sniffers remain free of overt political rhetoric. As an increasing number of musicians push for safer spaces and call out violent crowd behaviour, Amyl and the Sniffers gleefully encourage it. This may vary between cities and shows, but I would wager the Sniffers and their audiences deal largely in performative violence, which is in contrast to some of their peers and historical precedents; they’ve kept the brawny facade, but shed the malice. It’s play-fighting. But this remains prohibitive to audience members that have no appetite for aggressive shows.

The Sniffers also go further than a satirical pillorying of lower class Australian experiences. The band’s genuine affection for nostalgic, suburban Australia has a warmth and levity to it that does more than reach for a punchline. Yet, it is peculiar that these references are resonating with people now. Pub rock will always have sticky connotations.

Throughout the seventies, Australia was in a state of cultural flux. The country’s connection to Britain was slackening. Gough Whitlam’s brief but significant tenure ended over two decades of conservative governance. There was new funding for visual arts and film, with the aim of exporting these stories to the world. There was protest: for women’s rights and against the Vietnam War; the Aboriginal Tent Embassy was established outside Parliament house in 1972. The sense of a “new nationalism”—and a relaxation of liquor licensing laws—laid fertile ground for rock bands to find an audience in the nation’s pubs; Brit-influenced guitar pop gave way to tougher sounds and local references from bands like Coloured Balls, Billy Thorpe and the Aztecs, AC/DC and Rose Tattoo.

This period of pub rock, and its progression throughout the eighties, is often lauded for its embrace of “Australianess” and reverence of the working class. But the genre’s perception of Australia was narrow and helped to perpetuate our flawed national mythology—one that is hyper-masculine and overwhelmingly white. This is an ongoing, difficult truth for white Australian punk fans: specifically white Australian references resonate with specifically white audiences. When watching bands like the Sniffers who borrow affectionately from the past, what should we venerate and what should we condemn?

There is one very obvious difference here to the vast majority of original pub rock: this is coming from a female perspective. The rock trope of hard-living woman, instead of being sung about, is given voice. (She’s a lost cause, but she’s going to tell you so.) So, while the band may be politically indifferent, female authority is in full force. Crucially, Taylor doesn’t flatten her femininity. She also doesn’t hide her non-punk influences. With its plodding bass line and country flourishes, ‘Caltex Cowgirl’ from the first EP is Taylor at her most forlorn—and closest to Nancy Sinatra or Dolly Parton. A real cherry of the record is the flirtatious cheek of ‘70s Street Munchies’ (“Wearing my short shorts, my lipstick and all that”) and it is joyous to see a room of black-t-shirted men yelling this back to the stage when the band play it live. A question that I don’t quite have the answer for is whether this masculine presence is needed to give Taylor’s performance oxygen, but on the face of it, her power is supreme—existing within the same prism as Chrissie Amphlett in a school dress cavorting around with a neon microphone stand, or Kylie, surrounded by sheeny, shirtless men.

For me, the subversion of history is the real lure of Amyl and the Sniffers. Even as women made their way into the pubs as patrons throughout the seventies, female performers were actively discriminated against: excluded, heckled or not properly paid. In the younger crowd, there were a lot of female sharpies, but they were also relegated to the audience. The fact that Taylor is the leader of the gang is not a small irony. By performing the campy eroticism that frontmen are allowed without question—from Iggy Pop to Lux Interior to Bon Scott—she reclaims this as a valid female pursuit as much as it is a male one.

The Sniffers present a paradox that I can’t quite square. Are they an aesthetic reminder of Australian pub rock’s crude, fist-pumping nationalism? Or a canny feminist inversion? The complication is, they are both. As questions of identity and power continue to sweep through Australian music and its industry, there’s another question that we might be trying to answer more frequently: Does music always have to be a squeaky-clean extension of our social politics? I’m not sure.

What I do know is that the visceral is often pleasurable—hence punk’s exultation of the messy, physical and hedonistic. Unapologetic hedonism-seeking is stamped all over Big Attraction/Giddy Up. Not least in ‘Pleasure Forever’ in which Taylor proclaims “I find the beauty in the filth.” It’s there too in ‘Mandalay’, which describes a fantasy of eloping to an outer-urban estate: “All I wanted to do was ride shot gun / tank full of petrol, wherever you go… A better life awaits me in Mandalay.” And in ‘I’m Not a Loser’: “I fell asleep down there in the gutter / but it’s no worries, it’s as smooth as butter.”

Hedonism doesn’t leave much room for intellectual hand-wringing. Not giving a shit is the point. And it’s fun. Taylor asserts this perfectly when she sings “I’m not a fan, not a fan of tradition / I just want to get pissed here in my kitchen.” Rock and roll offers respite. This is the key truth—and temptation—of the Sniffers, and it’s a notion that has been enticing people for decades.

Kimberley Thomson is a journalist, editor and publisher. In 2016, she co-founded Swampland, a print publication dedicated to long-form Australian music journalism and photography.