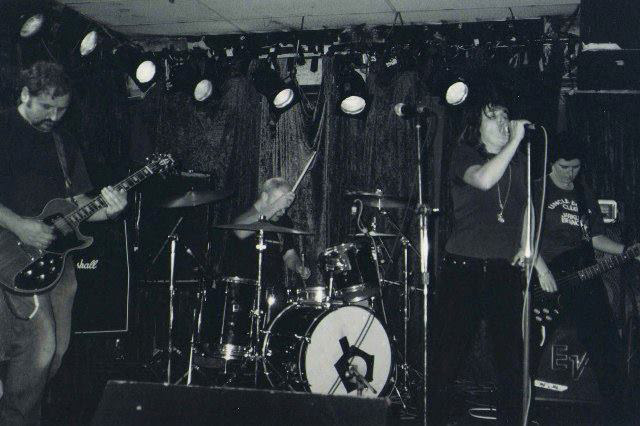 Dissect something to the nth degree and when you stand back you’ve actually probably killed it, or, at least, severely damaged its capacity for impact. A lot of record reviewers like to do that, I imagine on the principle that if you show how something works and dull its magic, it has no capacity to show how undeveloped the reviewer’s own creativity really is. But the fact is, everyone’s right about Little Ugly Girls. It’s the album 2018 needed long before anyone knew what 2018 would look like.

I lived in Hobart for a month in early 1996—the hometown of Little Ugly Girls at a time when they were at their underground peak. I thought I was going to live there permanently, which of course makes a place more in-your-face than if you’re just passing through; as it transpires, I was just temping, and it merely marked a skewed stop-off between moving from Sydney back to Melbourne. The only other major event of my time there was John Howard winning the federal election (the Port Arthur massacre happened two months after I left). The awe-inspiring Tasmanian scenery included the brief appearance of a shady pro-family conservative group, name now forgotten; remarkably limited mobile phone coverage (I did not yet own one); and the Cat and Fiddle Arcade. I sent my first ever email from a computer at the university campus at Sandy Bay.

When I came back to Hobart two years later I was playing with the band Driving Past, a couple of appearances in our usual mold (great songs, often haphazard shows). I am sorry to say I don’t recall any of the bands we played with, only that our host Julian Teakle (of Native Cats notoriety) would sometimes say that some group or another were ‘putting out a tape soon’: these were The Gentlemen, These Seven Months and Julian’s own redoubtable Frustrations. I gather Little Ugly Girls ‘put out a tape’ at this time too, though I don’t clearly remember ever seeing such a thing.

–
Teakle’s ongoing commitment to Hobart’s independent and original music has for decades been unselfconsciously blinkered and admirable. Kids form bands, produce tapes and Julian will proselytize, intelligently, with no condescension, about their importance. “Just hit 1400 entries on this archival Hobart music blog with a photo of the new Little Ugly Girls LP spinning on my record player,” he wrote on Facebook in early August, just a few weeks ago. The post felt like a remnant of Teakle’s, my and Hobart’s past, but it was also incredibly present. It held the memories of the riot grrrl influence of the 90s, and its particularly ‘Australian’ take. But it was also a reminder of the fertile and experimental music made in the smaller capitals, at the beginning of the conservative Howard era: scenes populated by little gods (some of whom, reading that, will just know I mean them) who fought battles amongst themselves and against the stand of dominant higher powers, knowing it didn’t matter beyond a small scope of people, but really, really caring.

Only some of this speaks to the inherent value of the Little Ugly Girls’ debut self-titled album. Recorded between 1995 and 2016 (although I feel fairly confident in saying that the excellent Rohan Sforcina, credited with at least some recording work on eleven of the twelve tracks, was not actually an adult in 1995; and bassist Mindy Mapp was similarly a teenager, playing in Gold Coast band Fur) the album’s putative conception and genesis both pre- and post-dates Linda and Danny Johnson’s (the bands’ respective vocalist and guitarist) other great recorded work.

In the middle of Little Ugly Girls sits Linda and Danny’s band The Dacios and their 2009 album Monkey’s Blood; an understandably more realised collection which sits very comfortably with this one. A person can imagine how much Little Ugly Girls has weaved throughout the last two decades, consistently gurgling under the surface of other projects (there’s no doubt a reason why this debut isn’t a Dacios record, or that The Dacios weren’t called Little Ugly Girls—but that doesn’t mean the casual observer could tell their records apart).

Perhaps concern about genesis can get in the way. While I can well imagine that, had this album come out in (say) 1997 it would have been somewhat lost—a fans’ favourite but with little cut-through—today it seems momentous. Most particularly what might have sounded like grungified rock in the late 90s now feels like it has precedents going back a lot further, to post-punk roots. The shift between Linda’s voice and just drums, or Linda’s voice alone, to full-on tight rock is almost clinically artful, like she’s an actor either reacting to scenery or being allotted backdrops, a classic example of how less can be more, and how an enduringly powerful performance can be sustained by a group of players working concertedly, everyone knowing their part like clockwork.

–
Having played nothing but this album for the last two weeks, I still can’t see it as anything but a finely tuned barrage. Just as individual songs leap from plane to plane of heavy minimalism, with Linda the only constant and clearly driving the vehicle, the balance of tracks seems to plot a different journey on each side. The drums in particular are key, (usually) simple but intensely solid, an underpinning for whatever others need to plaster over the top.

My one objection is to ‘Boxen-Hooda-Haya’, the track which closes side two. Whereas Monkey’s Blood ended with a putatively similar one weird trick (the pop song ‘Shoe Size’) this brings to mind nothing more than ‘Mother’s Lament’ at the end of Cream’s Disraeli Gears: after the onslaught of side one and almost all of side two, let’s have some funny doggerel. It’s a peculiar approach and one that doesn’t bear up to sustained listening.

That little imperfection just brings out the value of the whole though. It’s funny to think now about the mid-90s and how things like the election of Howard to federal government seemed like a retrograde step that spelt the last gasp of old conservative thinking (Pauline Hanson’s maiden speech: 10 September 1996). ‘How little we knew’ could be on anyone’s tombstone, but it seems even more pertinent to the end of the 20th century given what we’ve seen since. Rock isn’t anti-conservative per se any longer—but a left-field piece of hardline art rock always seems timeless whenever it bursts forth. On that basis, Little Ugly Girls could have come out in 1988, 1998 or now, and still seem fresh and outlandish: a classic.

David Nichols is an academic teaching in urban planning history at the University of Melbourne. His most recent book was Dig! Australian rock and pop 1960-1985 (Verse Chorus Press, 2016) and the co-edited Cultural Sustainability in Rural Communities (Routledge, 2017).